Sorting Truth from Truthiness in the Digital Age 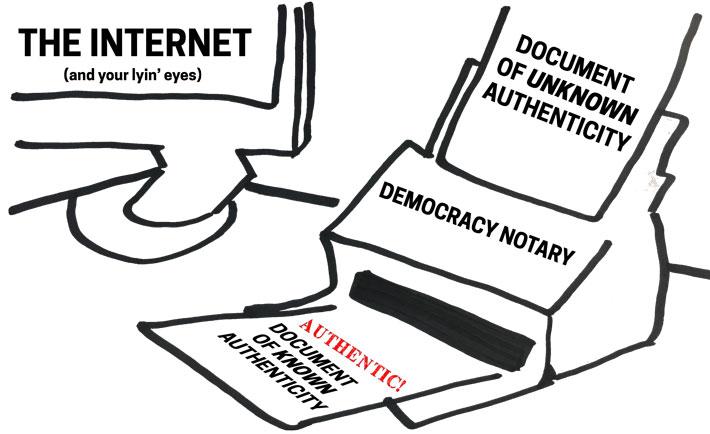 “Who you gonna believe” – as the comics say – “me, or your lyin’ eyes?” When it comes to politics, cognitive bias has always given citizens a strong push to believe “their side,” whatever the evidence to the contrary suggests.

As disinformation swamps the internet, the problem has become much worse with lyin’ evidence that’s all too easy to believe. Increasingly, information is forged or manipulated. Convincing but fake, this disinformation fuels hyper-partisan hatred, bolsters conspiracy theories and undermines critical democratic institutions. But identifying disinformation is only one piece of the puzzle. What we need is a way to stop forged information entirely; a way to prove that content is original and legitimate.

DemocracyNotary.org is one small step in that direction. The document-validation platform is designed to protect the integrity of critical political documents. Democracy Notary immutably encodes these key documents into a blockchain that can serve a “truth-check” when manipulated or falsified documents are used as a weapon of disinformation during high-stakes events such as elections. Blockchains, or distributed public ledgers, are complex cryptographic technologies that serve a simple purpose: effectively, it becomes mathematically impossible for data placed in the system to be altered or destroyed. Blockchain, therefore, can demonstrate the integrity of information and make it possible to debunk forgeries and manipulation.

The Democracy Notary was born from a collaboration between the Design 4 Democracy Coalition (D4D), the Blockchain Trust Accelerator (BTA), NDI, and blockchain software development company Emercoin.

On September 30, Macedonia held a critical referendum on formally changing the country’s name to the Republic of North Macedonia, as part of a landmark agreement with Greece after a nearly three decade dispute. In return, Greece promised to lift its longstanding veto to allow Macedonia to enter NATO and open doors for EU accession process. While the government promoted a public campaign to get out the vote – and to vote for the change – a movement to boycott the referendum was promoted largely online and through social networks that included aggressively disseminated disinformation.

Amid this environment, NDI and its partners piloted the Democracy Notary platform, using a special blockchain built by Emercoin, where NDI logged potentially influential reports from an independent, and non-partisan civil society group. With this infrastructure in place, the Democracy Notary made it possible to demonstrate whether an ostensible copy of a statement was legitimate – or a modified forgery.

This trial of the Democracy Notary platform improved understanding of how blockchain technology can be leveraged to verify civil society reports. Kostiantyn Bigus, the managing partner of Emercoin, explained why his company invested its time and effort, pro bono, to try and do something proactive to fight disinformation with NDI and D4D:

“The manipulation of facts is one of the most significant problems our society faces today. Together with our partners, we've developed a proposed solution based on the Emercoin blockchain to protect the integrity of documents which appear during events like the Macedonian Referendum. The prototype utilizes the benefits that decentralized technologies and the Emercoin blockchain in particular offer: high security, transparency, and trust. The prototype is universal and can be used for events that require the publication of sensitive data, the falsification of which may result in distrust of public institutions.”

Building on past work with creating trusted academic credentials, Emercoin was able to create DemocracyNotary.org in an incredibly short window of time. The partnership is a great example of how tech companies are able to work together with organizations like NDI to bring hard skills to bear on complex political problems and help grassroots groups globally in a scalable, sustainable way.

The Democracy Notary isn’t going to solve the problem of disinformation. However, by demonstrating that important documents can be mathematically proven to be original, it provides one way to verify critical information from the authoritative sources upon which citizens rely. The Design 4 Democracy Coalition will be making the Democracy Notary accessible to other trusted members of the Coalition to protect their documents as well. If you know of organizations who would benefit from having their public statements posted in an incorruptible form, please let us know.