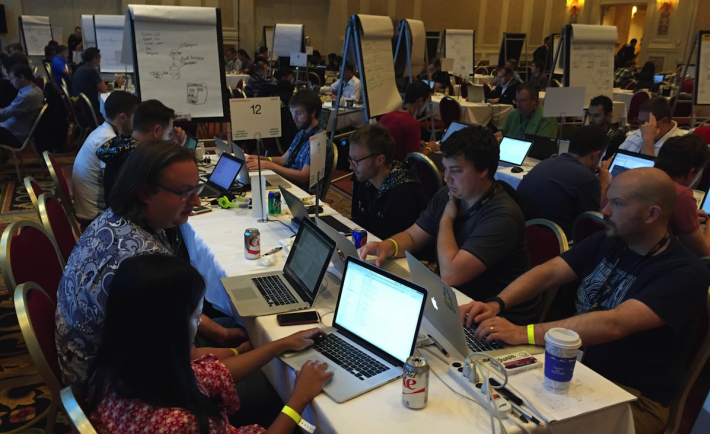 Over 18 grueling hours, more than 200 developers at the ReInvent Conference in Las Vegas hosted by Amazon Web Services (AWS) worked to solve tech challenges submitted by four non-profit organizations: UNICEF, NPR’s Marketplace, Donors Choose and NDI. NDI’s challenge to “design a framework for building story-driven text-based games that convey lessons in an engaging ‘choose your own adventure’ format,” drew more participants than any other project.
Throughout the hackathon -- an event in which a large number of people meet to engage in collaborative computer programming -- five teams worked to deliver functional prototypes of a game system. When it was all over, “Team 29” was declared the winner. The winning team and several other participants committed to bring the demo version to a fully-functional product in the coming months, which NDI will be able to use to enhance its programs.
Who said what happens in Vegas has to stay in Vegas?
Since the hackathon, NDI and its new partners launched a public beta of a game called StoryLand, which builds on the platform created in Las Vegas. The sample demo game created takes players through an adventure in urban governance. You, as a newly elected council member of the fictional town of Sunny Glen, must make decisions about how to allocate town resources. Your first choice: should you build the park that you promised your constituents during your campaign or come to the aid of a neighboring district that is without power and water after a devastating storm? Click here to play.
In addition to sponsoring the hackathon, NDI was invited to participate in a panel discussion called “Going All In with AWS.” Users, including representatives from Netflix, Capital One, and Major League Baseball, discussed their experiences and stories of migrating all of their computing needs to AWS -- Amazon’s cloud computing service. NDI Deputy CTO VJ Rao had quite a number of interesting stories to share with the audience.
The conference was a fantastic experience for NDI and a great venue for connecting civic-minded developers with NGOs and nonprofits. The partnership between AWS and NDI has been a fruitful one. Amazon has been a huge supporter of DemTools -- NDI’s suite of open-source webapps designed to solve some of the most common challenges NDI programs and partners face. NDI will be launching the next generation of DemTools -- DemTool 2.0 -- on December 9. DemTools 2.0 includes substantial improvements to NDI’s existing suite of tools, along with three exciting new applications.
Keep an eye out for future projects - there’s sure to be others in the future with Amazon’s support.
Topics
Crowdsourcing