EMOTIVE, "Mapping the Mood of a Nation" 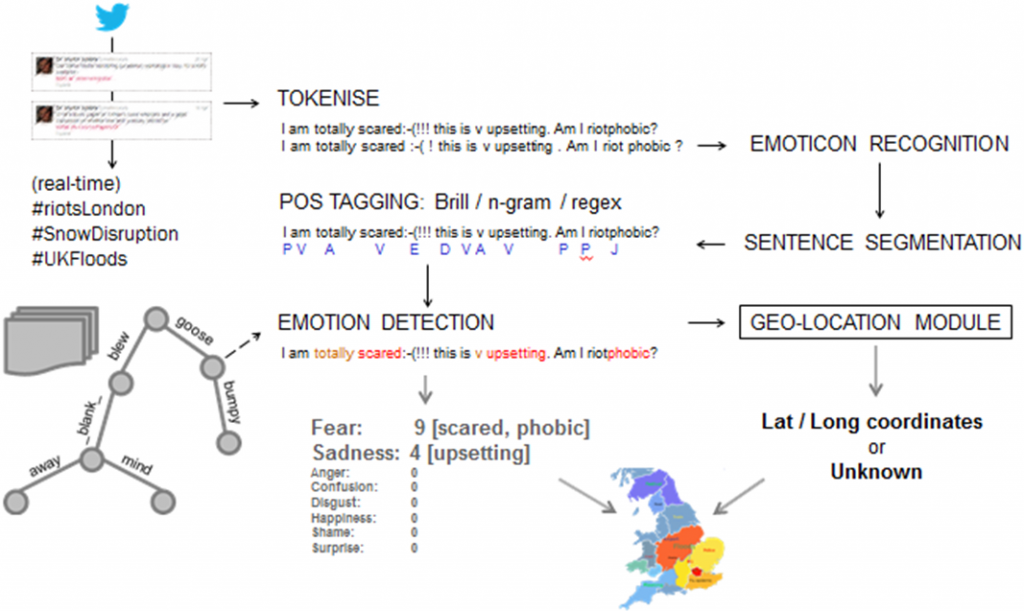 It goes almost without saying that Twitter has changed the landscape of how people express and exchange their opinions online.  Currently Twitter is host to 554.75 million users with an average of 135,000 new users signing up for the service every day. It is estimated that there are 9,000 new tweets every second. What is more, Twitter users have broken the news on events before the mainstream media.  The Boston Marathon explosions, key events during the Arab Spring, and the London G20 riots as well as numerous earthquakes and other natural distasters were events where real-time updates were found on Twitter before anywhere else.

Based on this, Researchers at Loughborough University in London have developed a new system for “Extracting the Meaning Of Tears Information in a Visualization of Emotion” aptly adapted into the acronym EMOTIVE. The academics working on this project say this new program can analyze up to 2,000 tweets a second to serve as a map of real-time public sentiment.

EMOTIVE is supposed to be able to extract emotion from each posting, thus departing from the constraints of “positive- neutral- negative” sentiment constraining similar software. Eight key emotions are picked up by the software: anger, confusion, disgust, fear, happiness, sadness, surprise, and shame. The ontology contains over 300 emotional terms and utilizes intensifier, negation, conjunction, and interjection words and phrases that can ultimately classify sentiments into one of these 8 key emotions.  EMOTIVE also is capable of determining the strength of each emotion it depicts across three levels: strong, medium and moderate.  For instance, the software recognizes synonyms for an emotion, such as happiness, and the varying intensity with which each term is associated; “ecstatic” is a much stronger expression of happiness than “pleased.” EMOTIVE’s emotion strength scoring approach was evaluated against SentiStrength-2 and showed a consistent and statistically significant correlation.  This indicates that EMOTIVE is capable of measuring sentiment in line with current state-of-the-art systems while coping with large amounts of data and near real-time processing.

Beyond emotions, EMOTIVE tracks geo-location. Using vernacular and location indicators the software creates an interactive map of hot-spots, highlighting where emotional messages are clustering. Developers believe their product will be instrumental in helping determine the mood of a specific nation or area and serve as an alert for events as they unfold.

All of this considered, EMOTIVE is poised to be compared with software’s such as Crimson Hexagon which we here at NDI have been using to assess online sentiment in specific countries on specific political issues.

EMOTIVE’s developers are positioning the program to be used by governments to identify early threats to public safety and discerning public mood.  They also tote it as a tool to track threats to public safety and guide public policy in the wake of major incidents. Crimson Hexagon is a much more dynamic software that enables a user to define for themselves and search out specifically created categories and the public sentiment they produce. Crimson Hexagon’s target user is more likely to be a business, NGO, or government agency seeking an answer to a specific question rather than merely identifying wholesale real-time sentiment.  Crimson Hexagon uses their BrightView algorithm, specifically, to analyze online content holistically without attempting to comprehensively classify individual posts.  While the tools appear to function with a similar goal in mind: harnessing social media and interpreting trends, they go about doing so in different capacities.