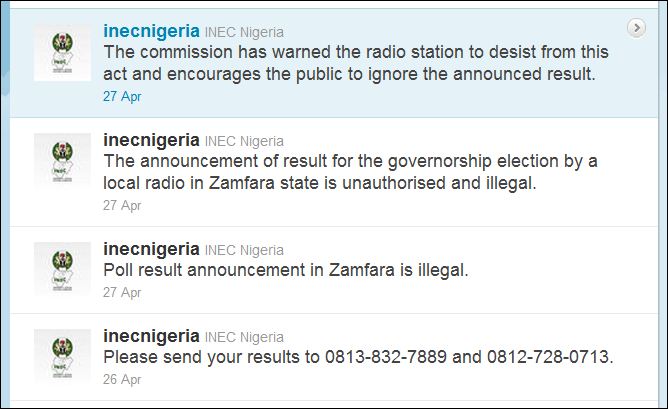 Here are a few thoughts from our friends on the NDI Elections Team about the utility of Twitter in election monitoring efforts across the globe. Twitter is a powerful and multidimensional tool. Its marquee value is the aggregation of real-time data that can be exponentially distributed or simply shared with a selected user. Regardless of how it's used, Twitter can be integrated into election monitoring efforts around the world and here are a few ideas from NDI's Elections team that are predicated on the difference former NDI Tech team alumnus Ian Schuler makes between crowdsourcing and citizen reporting. For Crowdsourcing/Public Relations Purposes Aggregating Hashtags Tweets with a given hashtag could be aggregated to form a combined report of thoughts and activities. For example, one could analyze and compare data from the 2011 Nigerian tripartite elections tagged with "#nigeriadecides" or Egypt's revolution "#jan25". Someone following #jan25 would see all of the comments and could pull out those that are relevant to a certain topic (e.g,. election violence). This kind of analysis is already being done by companies such as Radian6 and Sysomos, to name just a few. While these companies offer their analysis tools to corporations doing market research to find out more about their customers, the same technology could be used to aggregate and analyze hashtags around elections to analyze all sorts of data pertaining to an election. Verified Sources As monitoring organizations collect a huge amount of centralized data, they can become a primary source that provides information on the conduct of an election in real-time to thought leaders and the general public. However, election day is chaotic and some information is overlooked for the sake of efficiency. To give a more thorough portrait of the election, organizations could designate verified sources (such as a PR rep) to provide authoritative information such as critical incidents and violations to the public and journalists on behalf of the group to note some information that may be otherwise unreported. Primary Sources to Journalists and Thought Leaders Election monitoring collects a HUGE amount of primary data relating to the conduct of an election. It could be advantageous to target such information to thought-leaders or journalists that are recognized as an authorities on a subject. This would be especially useful to monitoring organizations that work in countries without widespread internet use as they would become a primary verified source for journalist, both domestic and foreign, and other monitoring organizations. It would also be useful for disseminating information from another language into English. In example, NPR's Andy Carvin curating boatloads of information from the Middle East and North Africa from citizens and authorities alike. For Technical Monitoring/Citizen Reporting Purposes (verified information) Hashtag Reporting Twitter hashtags could be used to report information that is based on critical incident reporting from a network's trained observers. Using hashtags would not likely be a primary reporting mechanism but it would enable the reporting of tertiary information, such as a violation of a finer point of electoral law that may not be on the primary reporting form. This could be implemented tactically by giving observers a temporary number for their handle that would be assigned to a specific location. For example @a31422455b "Olga Ivanova" could be assigned to the Kirov Primary School #12 polling station in the Kirov oblast in Russian parliamentary elections and she could report a violation with #MonitoringOrgNameCI. The aggregated hashtags could then be added to the main monitoring database for the group's final report. Observer feeds could be made public or private, depending on the group's preferences.

Live Tweeting of Reports Reports from field observers could come to the headquarters as SMS messages and after review could be converted to tweets. Code could be written into the database to interface with the Twitter search API to provide a real-time account of monitoring efforts. Even the location of the report/event could be added to the tweets with a little code work preceding the election. This would provide a voice on Twitter to observers reporting from areas of the country without internet access. Those truly curious about the nitty-gritty details of monitoring efforts in a given country could subscribe to a monitoring group's Twitter feed, which would provide hundreds to thousands of tweets on election day. Media Monitoring One of simpler uses of aggregated tweets, groups--particularly in semi-authoritarian countries--could use Twitter to show what in-country news agencies report versus international news agencies. Groups could also analyze what Twitter users in a given country are tweeting about, political or otherwise, versus the information is provided in state newspapers. This type of comparison could be done over the long term as part of media monitoring. Potential for Development Analysis of Public Sentiment If allowed by Twitter, one could track all tweets by IP addresses in a given country and it could provide real-time analysis of public sentiment around a given election if graphed over time. It would be especially interesting to monitor keywords from tweets both over geography and time. Twitter could consider doing this and making the collected information available as a public service, or someone else could develop this capability and make available the information to NDI, our partners and/or others. Admittedly, this information would be likely be skewed towards youth and upwardly mobile citizens. As long as obvious biases are recognized, the information could still be useful. Mapping Incidents In a country with well developed communications infrastructure like Egypt, it could be possible to map critical incidents by plotting the IP address coordinates of the sender, which would provide an of idea of where activity occurs. Tweets have location coding embedded as they go via the Internet, and smart phones have GPS information build in to them. Where Twitter would have an edge over Ushahidi is the automatic location tracking rather than just keyword scanning to designate a source. This kind of mapping been done to an extent surrounding the Arab Spring, but to chart this information geographically and qualitatively, specifically by long-term observers, would make for a powerful visualization, as it could provide a long term portrait of how an election is conducted. Finding Thought Leaders and Targeting Info It would also be useful to track who in a given country is getting the most retweets or quoted tweets around the country and/or globally. Whether it is a journalist, celebrity, media guru or average citizen, NDI or a partner could release information/statements/critical incidents to these identified people to enhance chances of them picking it up and giving it wider dissemination. This would in part be a PR tool, but to analyze who has the most influence over online discussion could be potentially useful for groups trying to make themselves heard. To close, if any of these ideas were acted on, it would be very important to evaluate the potential risks involved for monitoring organizations. There are plenty of caveats to each of these points and careful consideration should be given to the quality of data, costs for development and country infrastructure, among other factors. That said, the value of Twitter is significant and could be a potentially useful tool for election monitoring groups. The NDI Elections team is happy to discuss in further detail and we welcome comments and input.
Topics
Elections
Social Media
Democracy Development