Afghanistan Elections 2014: Where will observers be? 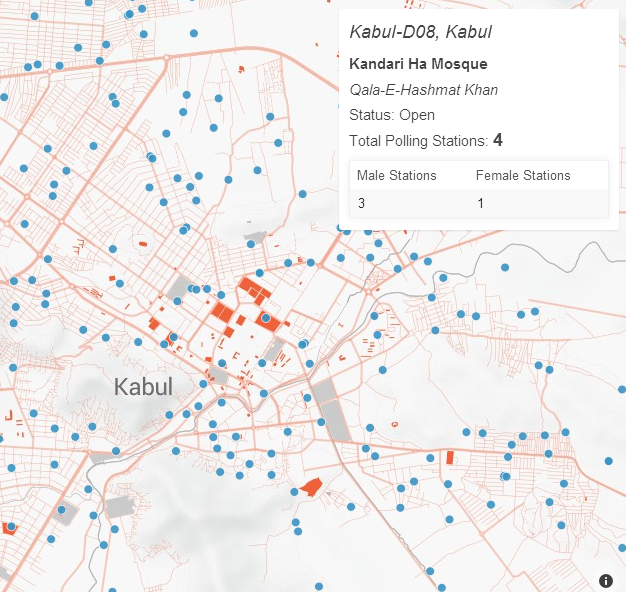 The upcoming Afghanistan election (5 April) is the third presidential poll since the fall of the Taliban, and should pave the way for the country's first-ever peaceful democratic transfer of power.

Given the public’s lack of confidence in the government’s ability to run a credible election, NDITech has worked with local partners to use digital technologies to enhance transparency and participation in the election process.

In the 2014 edition, the site highlights observer deployment shared by Afghan groups with the public. This enables stakeholders to understand which regions of the country will be covered by trained citizen monitors. In addition, polling center location and district aggregation data highlights the relationships between polling center locations and observer group coverage. As before, all data is available for download.

In this cycle, the Afghan Election Commission (IEC) has taken a positive step forward in publishing polling station data ahead of the election.

One of the key goals of the Afghanistan Election Data site is to make the election process more transparent.  Pay attention to this space, as we’ll analyze results from the election and compare with data from several other sources, while providing tools that make the data easy to use so people can better understand and assess the quality of the election process.

Since 2009, an ongoing initiative with this goal in mind has been the Afghanistan Election Data project.  The existing site uses data browsers, infographics like maps and graphs, and a clean design to make information as easy to use as possible. The project strives to provide tools that make the electoral process more transparent by allowing anyone to slice and dice the data as they see fit for their own analysis and to draw their own conclusions. Beyond election results data, the project has included a variety of base layers to provide additional context, and includes an Open Data section which allows universal access to all the election and map data in one place for easy download.

We’re grateful to continue working closely with Development Seed on this project, a leader in creative strategy and open source applications. They’ve also been collecting and visualizing a variety of data sets in the Afghanistan context.