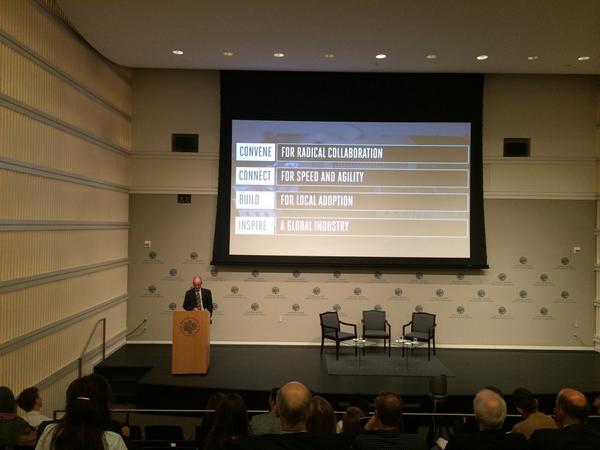 I had the opportunity to attended the United States Institute of Peace’s Engineering Durable Peace Summit last week (#peacetech), an event hosted at USIP as part of their launch of the new PeaceTech Lab. Attended by individuals ranging from mechanical and software engineers to young entrepreneurs, journalists, and tech4dem folk like us, the summit hosted several dynamic panel discussions and a morning filled with quick-hitting “lightning” presentations on some of the most exciting innovations in the PeaceTech space.

Many of the innovation presentations focused on the power of mapping, social media, and mobile technologies - particularly in relation to conflict prevention and amelioration, crowdfunding, and humanitarian communication. This includes a presentation by Kalev Leetaru on the GDELT project, which touched upon the potential for mapping and analyzing social information on protests and conflicts. In addition to features on other applications such as Rachel Brown’s SisiNi Amani project and Kalsoom Lakhani’s invest2innovate, the morning also saw Internews’ Anahi Ayala Iacucci present about the potential for a so-called “third space” in social media to reduce the rigidity of dangerous narratives and communications surrounding conflict.

.@anahi_ayala of @info_innovation addressing potential of social media to break down "us vs. them" narratives in conflicts. #peacetech

After a fascinating panel discussion between Google’s Vint Cerf, one of the “fathers of the internet”, and Jane Holl Lute, the President and CEO of the Council on CyberSecurity, the summit reached its much anticipated peak - the launch of USIP’s new PeaceTech Lab.

The new initiative, announced by Sheldon Himelfarb, is billed as an attempt to spark the creation of a Peace Tech industry. Considering the dominance of what is frequently termed a “war tech” industry, the idea certainly resonated with me and many others at the conference who believe that technology can be used as a positive force at a massive scale.

The PeaceTech Lab is spinning off from USIP to focus exclusively on the intersection between technology, media, and data. The lab represents a truly collaborative space where tech experts and conflict management experts can come together with fellows in zones of conflict to “imagine, develop, and deploy new tools for the field.” In addition to new peacetech tools, the lab will also create curriculum-based multimedia content aimed at altering conflict behavior, and will be at the forefront of implementation of new data collection, analyzation, and visualization methods.

The ideas presented during the summit and the launch definitely caught my attention, and it’ll be exciting to see how the PeaceTech Lab grows and develops in the coming months and years!