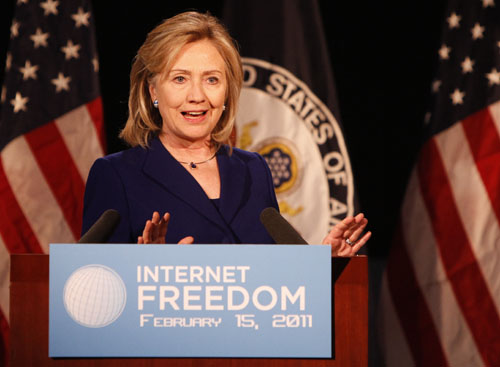 Tonight Secretary of State Clinton will keynote our annual democracy award dinner where NDI will recognize the leadership of some of the people and groups who have championed democracy around the world over the last three decades. The program will also recognize leaders from the Arab Spring uprisings underway in the Middle East and North Africa. One of the themes of the evening will undoubtedly be the role of technology in democracy and these democratic transitions.

The word we're getting here is that the Secretary will be delivering a major policy speech on democracy, and while I don't have any inside information on the speech, we're listening carefully to see if she uses it to provide additional leadership on technology and democracy.  You can tune in live on CSPAN live at 8pm Eastern Time, and we'll provide links to the speech when available.

To date the Secretary and her team have provided unprecedented leadership about the important role of technology in democratic development. We've never seen this kind of approach from the State Department before, and it is welcome. And I'm not just saying this because she is keynoting our dinner, or because they fund some of our work or that they placed some of our former staff in key positions on these initiatives (but this is worth disclosing). On the contrary, those facts inform my view that I think the leadership the State Department has provided on the role of technology on democracy and democratic development the last three years has made a positive difference.

The State Department has put in place at least three major policy initiatives that have been helpful and shaped some of our work over the last few years.

The most widely recognized program is probably the Internet Freedom initiative that has resulted in significant resources and focus dedicated to extending the political rights of citizens in authoritarian states to the Internet, and extending rights of speech, association and access to information online. As I've written before, this initiative has impacted our work positively and helped us put in place improved procedures and technologies to protect our partners and staff around the world and continues to do so.

The Civil Society 2.0 work that Secretary Clinton announced in Morocco in 2009 and in Krakow in 2010 puts a focus on the key role of civil society in democratic development. The resulting [email protected] and international TechCamps in several countries have been worthwhile initiatives that help convene the tech, activist and NGO communities here in the US, and raise awareness around the world about the power of technology to strengthen the hand of civil society groups to advocate for their issues or hold their governments accountable for their actions. NDITech has seen first hand the benefits of several of these meetings, hosted the open source unconference at our DC office last spring and have connected our partners on the ground to the programs in several countries, including the Bucharest TechCamp next month.

Finally, the Open Government Partnership (OGP) recently launched by a consortium of governments including the US committed to being more transparent and accountable provides a significant opportunity for NDI and our partners around the world. The OGP is a mechanism for civic groups, legislators and political parties to hold their governments accountable to their committments in countries that have already made committments such as Indonesia and Mexico, and to nudge governments that haven't yet made the committments to join the partnership and open up their data sets, budgets and services to public scrutiny.

NDI is already exploring ways that our global network of almost 200 election monitoring groups might use this as an opportunity to lobby their governments to make committments to provide access to key election data and information embracing open data principles (possibly using our Afghanistan project as a model), and NDITech is exploring a range of other ways to leverage the OGP to drive innovation in open data and other technologies to push transparency and government accountabilty. We hope to have a lot more to say about this in the coming year or so.

I'm looking forward to the speech tonight. We'll be listening to see if the Secretary will help push these programs further or even introduce new technology and democracy initiatives that might help NDI and the groups we work with better leverage the power of technology toward democratic development.