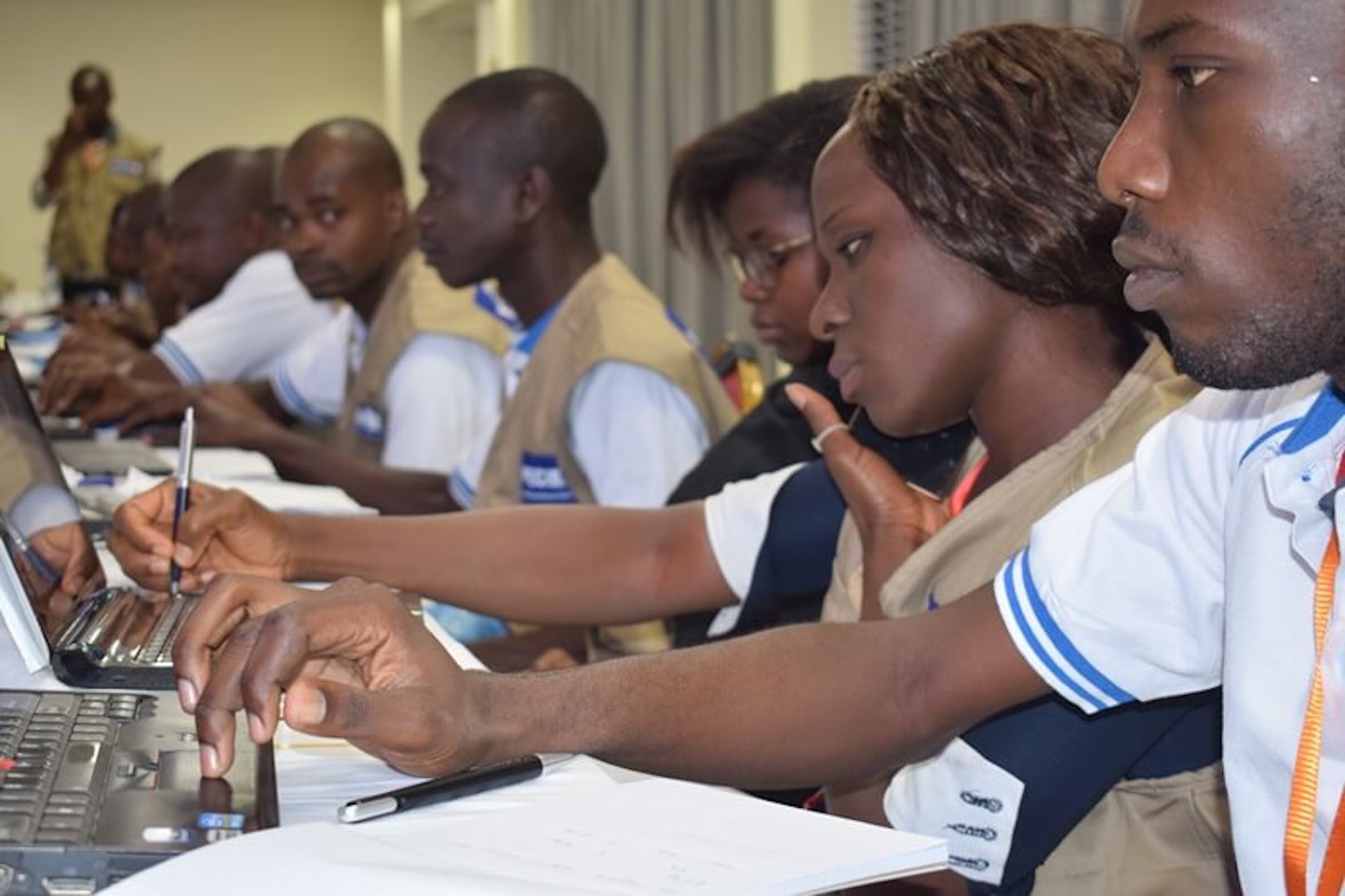 Sarah and I are on the ground here with POECI for the parliamentary elections today - we'll be sharing some anecdotes from the field as time permits. Most recent at top.

We’re now in the final push tonight. I’m sure it sounds terribly sycophantic, but the team here has done a really extraordinary job- they are ONE OBSERVER away from getting 100% of all reports from all the people. No one quit, no one sick, no one who flaked or screwed up so badly they had to get dropped. This one last person is asleep, apparently, but we’re considering getting a helicopter and collecting the info that way.

As virtually all data is in across the board, clear patterns begin to emerge - and outliers stand out. POECI observers are sending incredibly complicated text messages - how accurately would you be able to type this on a feature phone?

Apollo has a system for “logical checks” built in where you can look for things that are weird or real outliers- over 10% of ballots that were spoiled, for instance, or more total votes than registered voters. Most of the time it’s an error by the observer that is easily fixed, but sometimes the numbers are either correct, but unusual, or wrong but what the official results of the polling station indicate.

Mental capacity not at the highest right now. My favorite activity when my brain freezes over these days is to watch the progress of our Facebook ad buys- as Sarah mentioned, it’s very gratifying

One note: as it happens, Ivoirians are pretty anti-smoking. Our friend Anis is from Tunis; therefore, he’s a smoker. The POECI team ribs him relentlessly about it. - Chris

Well, the polls closed over five hours ago now, and our data team is still busy following up with observers out in the field - both chasing those who haven’t submitted data, and ensuring the integrity of what has already been texted in. As Chris mentioned, it could potentially be a long night, and in the meantime, a team of data analysts are sorting through the data to identify irregularities and assess the figures coming in. POECI has a press conference scheduled for 11:30 am tomorrow, so it’s vital that we have as much data cleaned and validated before then as possible.

A key element of POECI’s work is also to make sure all their hard work and analysis is seen by a maximum number of Ivoirians, and part of our scope of work out here has been to support them with their social media strategy and outreach during the PVT. They have a great communications team, but not quite the national outreach they need to reach certain key demographics - particularly youth. We eventually agreed on an advertising budget for Facebook, and from the time the first ad campaign was launched on December 15th, their “likes” jumped 167% from 7,834 to just shy of 21,000 as of this posting. It’s frustrating that such measures are required (as in - how FB’s algorithm’s are designed basically to suppress group posts unless you shell out money to “boost” them), but it is certainly rewarding when you see hundreds of people engaging with POECI through likes, shares, private messages, and offers to volunteer. - Sarah

Observers did an amazing job of getting their morning data in - data clerks were able to chase down those who didn't text in right away. WIth all that in hand, the analysis team crunches the numbers to try and figure out what it all means. From there, it gets handed off to a team who writes up an official statement draft for discussion and debate by the senior leadership. In our case, we also started putting together some factoid graphics to highlight particularly important aspects of the data. You can see the finished mid-day statement here. Everyone's really dragging mid-afternoon; people eat late here, so by now we're all a wee bit hungry.

We're rotating out the first group of data clerks-  the new crew looks a bit more bright-eyed and bushy-tailed. They are stuck here until as late as 1:00 AM, so we've got a long way to go still... - Chris

As during the days leading up to the election, the hours are flying by. Our internet systems are holding steady so far, which would certainly make all the effort involved with creating redundant systems worthwhile. In addition to a VSAT connection, we've got a DSL line, three Wiboxes, and 8 cute little portable "dominos" that seem to be keeping everyone online to this point. The few tech support requests that have come my way have generally been resolved with the most basic of troubleshooting skills. Luckily, with well over 100 different electronic devices plugged into dubious power strip configurations, we haven't blown any fuses and the lights are still on. Powering much of this operation are 38 mobile phones set up via Telerivet to route messages between Apollo and our 1,444 observers. At first we only had two devices (one for each of the main mobile networks here in Cote d'Ivoire) set up to send out blast messages, which were taking 45 minutes or longer to transmit. However, at the last minute we discovered a handy feature in Telerivet that allowed us to distribute the messages across 30 phones instead, reducing delivery time down to about 5 minutes on average - critical when you need to urgently contact your entire observer group. - Sarah

Well, we are making up for the coffee - ordered two overpriced espressos from the hotel kitchen, but worth every CFA. Day has been rolling along well - almost all of the second SMS are in, describing the details of the setup of the polling station. As always, there's some random curveballs that come at you; for one, there were some places where we had by random chance both a national observer and a constituency-specific observer. That confused things a bit, and we had the risk that strict polling station officials would perhaps kick one of them out, so we needed to get a handle on the size of the problem. I fired up my local MySQL database (I use the Mac GUI tool SequelPro, which is awesome) and built a simple DB I could query to find duplications.

We're getting some really lovely pictures from the team in the field- you can see them on the POECI Facebook page. It can be a bit isolating, however fun the clerks are, to be in the heavily air-conditioned hotel conference room with the fluorescent lights when you know all the action is going on out there at the polling stations.

Getting hungry. A friend was going out for a bit, so we've requested a bunch of coke. Rarely touch the stuff in the US, but sugar+caffeine (plus a certain homey comfort) is really nice when you're feeling wiped out. - Chris

The arrival messages are almost all in now; we think that most of the gaps are people who are managing polling stations that are so remote that they don't have cell phone access. Observers are settled in for the long haul of watching their polling station all day long, filling out an elaborate checklist with all the information needed to verify that the election process was fair. As the different districts complete all their information, Franck the floor leader (pictured) will say "Nous avon un Boom!" and the whole group will yell "Booooom!" and clap. Very cute, and keeps up the energy during a long day of working the phones.

The POECI president is an Imam, and the kindest guy. However, he's a formidible negotiator - when he realized that lack of internet could be a problem for the office, he personally got a number of different offers for something that wasn't GSM - and then got them to drop the price a lot. We ended up with a DSL line which is currently supporting virtually all the computers you'll see in our datacenter pictures. As I've said before, we're in the redundant redundancy business, so we've also got people fallbacks to two different GSM data providers. - Chris

Currently running off of two hours of sleep, and still no coffee (aka Nescafe - Chris's favorite) in sight. Fortunately, the tech support challenges this morning (post-Apollo crisis) are limited to simple user error issues and no major system failures (knocking on all the wood I can find). I am quickly becoming an expert on how completely impractical the French keyboard design is (who wants to shift to type a period? Why is it so hard to find the @ symbol?), and all the French words related to wifi connectivity. Otherwise, so far, so good. The first reports are trickling in, with observers reporting on polling station manager arrival times. - Sarah

Well, if you have to wake up at 4:00 AM, it's easier to get out of bed when you start with a heart attack. We're using the Apollo election data management DemTool here to manage the information flowing in from our 1,444 observers at a statistically-based random sample of polling stations across Cote d'Ivoire. Well, turned out that there was a glitch with the system after we resized it last night. Part of the fun of using Amazon Web Services for our work is that when you need it you can massively scale an important server for the, say, 48 hours around a big event - I always imagine some sort of Bruce Banner transformation going on. So scale it we did - but apparently some small piece didn't come up correctly upon restart. We figured that out right at 4 AM, as our observers were trundling off to their (often very remote) polling stations. With some quick work from Apollo's developers, Tim Akinbo and Dipo Odumosu, we were back in business in plenty of time. - Chris