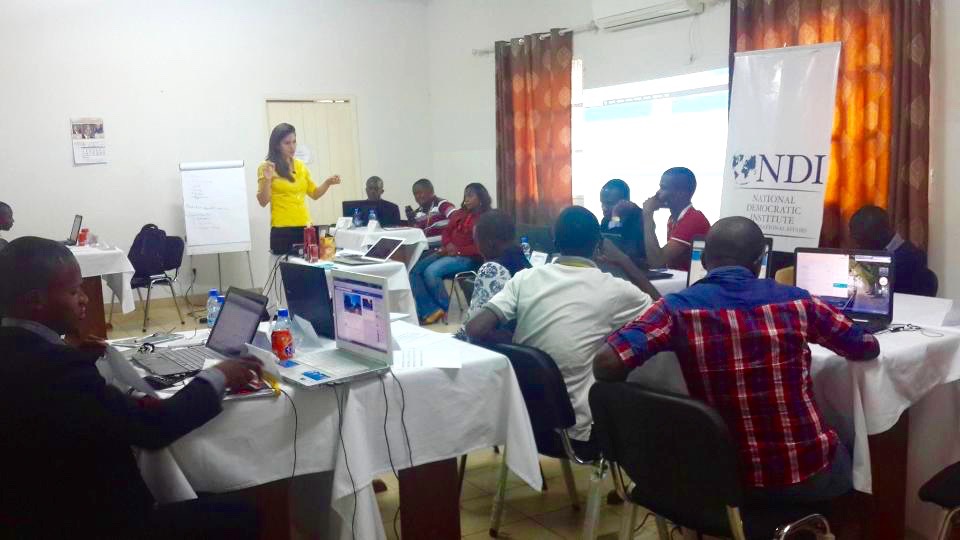 Last month, NDI trained political parties in the Democratic Republic of the Congo (DRC) on the use of CiviParty, NDI’s contact management DemTool, which is based on the open source contact relationship management (CRM) system, CiviCRM.

Citizens of the DRC operate in a low-tech environment, where only 2% of the general population have access to internet. The current government is a decentralized, semi-presidential republic, with a constitution that defined power separation between three branches of government and distributes power between the central government and the provinces. Yet the political context is often characterized by a lack of competition, and elections are not always seen as fair.

NDI’s program in the DRC seeks to empower political parties to organize more effectively, to mainstream women and youth, and to empower parties to be more effective organizers. As part for this program, NDI is providing fully hosted CiviParty systems for six political parties from both the majority and opposition on our DemCloud Software-as-a-Service (SaaS) platform. For a CRM to be introduced effectively into this context, we recognized several necessary elements for successful implementation 1.) Organizational motivation to adopt new processes  2.) Technical capacity to manage the sites and data 3.) Confidence in the integrity and security of sensitive data on an NDI hosted system.

All three of these criteria were critical elements to the incubation and training of these participants and to the ongoing support NDI will offer throughout the program.

For parties to go through the substantive work of transmitting all their contacts into CiviParty and changing centralized workflows, they had to ultimately see the system, and the shift in workflow, as useful.

A core component of NDI’s ongoing programming in the DRC concerns the  motivations and incentives of political parties in DRC to be more responsive to the needs of their constituents, and to provide opinions and source feedback from constituents on core political issues.

Built upon months of developing party capacity to be responsive to needs of their constituents, we presented Civi as a tool to better able to deliver far-reaching strategies to identify constituent concerns, to organize committed supporters, and to be effective responders and communicators. Substantial time in training was spent talking about strategic communications, the value of identifying issues supporters care about, and how structured data can feed into a purpose-driven organization strategy. We demonstrated to parties the benefits that could come from having searchable, structured contact lists, and the ability to mass communicate with members and supporters.

The party members we convened were engaged, enthusiastic, and saw incredible value in better management of their information, but they had little experience with working systematically with data, nor with managing a system as sophisticated as CiviParty.

Three days of training focused on basic skills in contact management. We cleaned and organized data, determined the fields of information we would be using, and practiced importing, exporting, and tagging groups. We also reviewed and practiced the enhanced communication services CiviParty offers, such as mass emailing, SMS, and event planning; and talked about the utility in understanding the types and levels of engagement parties had with supporters and members.

If CiviParty is going to become a centralizing tool for organization, political parties in the DRC must have confidence in the security of the system they are uploading, and the integrity, availability, and confidentiality of their data, all three of which were a substantial concern for parties.

Availability: Early this year, government officials in the DRC cut access to the internet for almost a month in response to widespread protests. With the real possibility that this could happen again, political parties feared storing data in the cloud. In response, we offered parties several options for security, including storing data exports in encrypted persistence volumes in a Tails USB, and upgrading to enterprise internet accounts, which had evaded internet blackouts in the past.

Integrity and confidentiality: As CiviParty is hosted on NDI’s DemTools SaaS platform, NDI system’s administrators would have access to the sites to perform upgrades and maintenance. Despite confidentiality agreements signed between NDI and these parties, there was palpable discomfort at this idea. These members rightfully wanted confidence that their data would not be altered or accessed unduly. Here, we find ourselves at that great divide called trust. Party members raised skeptical brows, asked about the NSA, and referred to news reports they had read about the U.S. government’s collection of data. NDI has worked in the DRC for more than 20 years, and ultimately, it was our word, as well audit logs, that we could offer to reassure parties that our only interest was to empower them to be stronger voices, better organizers, and more receptive listeners to their nation.

Following the training, I took some time to debrief with the participants. It was clear that substantial follow-up would be necessary and political leadership could derail the project, but I wanted to know - was it useful? Did they see power in mobilization? Did they see the same promise that we saw?

I asked participants what they took away from the training - their translated answers are below.  I’ll let you decide.

“We have struggled for a long time to find ways to gather provincial data and understand it. I believe with time and training, implementing this program will make this easier and help us to communicate better, making our party stronger, more efficient, and better able to respond. This will also help us better target women and include them in programming. Although, I worry that internet connection will be a problem.”

“We are beginning to understand what better information management is, so that party actions can be swift, so that we can render better services, respect needs, and organize in a targeted way. We can better identify the issues that are important to people and are now better able to use our data.”

“It was important for us to learn more about strategic communications and this program and the system will help us to rise to international standards. CiviParty is going to help us gather our needs, provide greater interaction between members, and help target real problems. We are better suited to understand what people want and expect.”

‘We’ve been trying to get parties more organized for a long time and to be effective in their communication and we made significant advancements through this project. Additionally, it's hard to recruit from other provinces, and this system will help empower both a decentralized provincial structure, as well as a central national leadership. It will make parties more modern, help them maintain their data, and will really help with communications.”