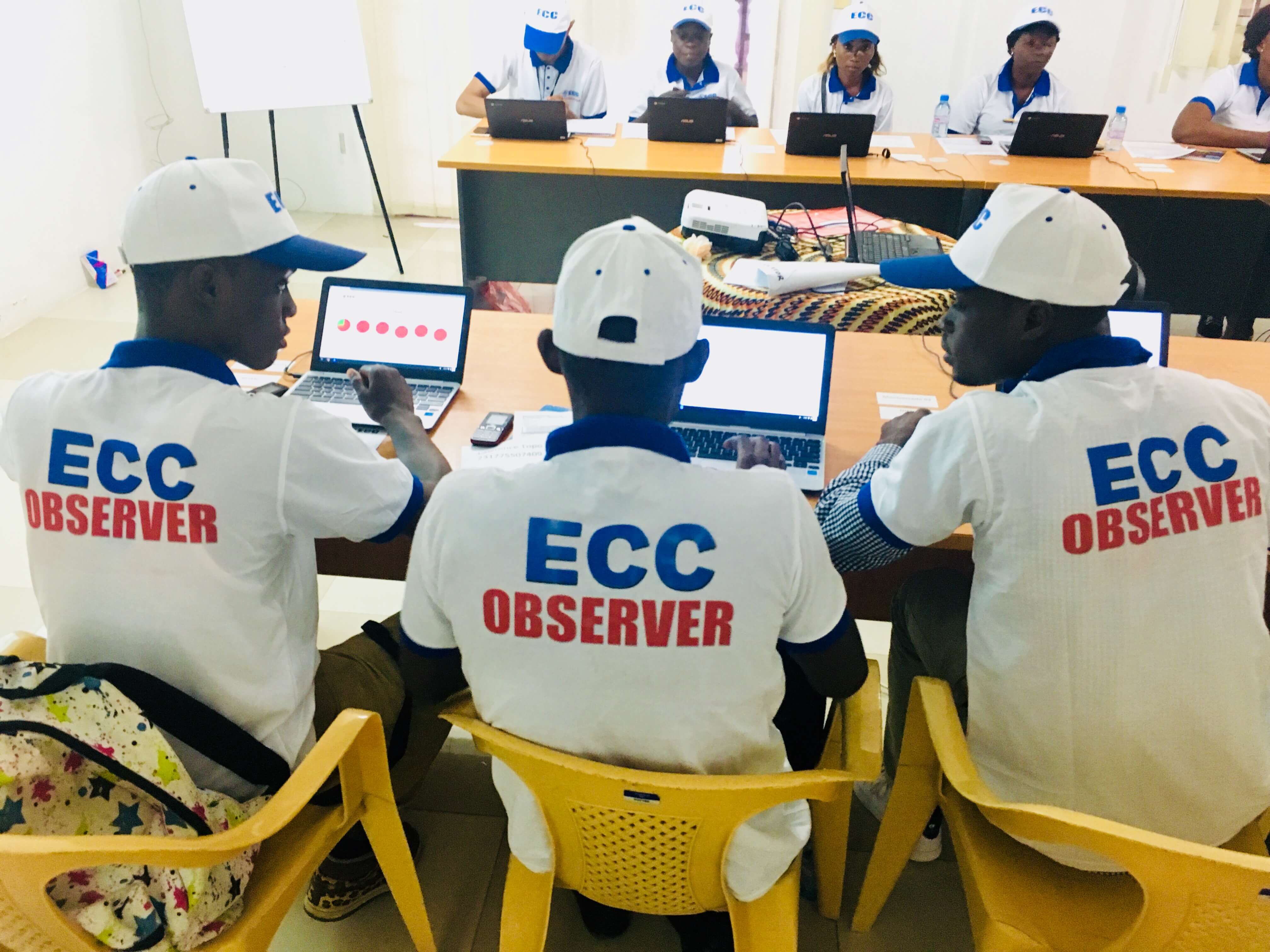 I'll be sending along updates throughout the day from the ECC datacenter as Liberians go to the polls today to vote in the Presidential and House of Representatives elections. Most recent updates are on top. Note: this blog post does not contain any official or unofficial information regarding the results of the observation. This will be released only by the ECC.

Well, we're calling it a wrap. Until 6am that is, when the quest of gathering missing and/or incomplete data will continue until we're finished. The second shift of ECC data clerks have been fantastic - they've been here for over 12 hours already, and are still calling observers, who are STILL sending in data once the results are counted and posted at their polling places. Thankfully from the technical side of things, our internal systems worked well, and other than the (still traumatic) network outage from earlier in the evening, the mobile networks are back to normal.

Still here! The ECC data clerks are awesome and are powering through to continue chasing data and calling observers, many of whom are still at the polling places. Delays in counting mean delays all the way down the line. There's plenty of caffeine to be found in the kitchen (as well as a plethora of very tasty, but very bad for you snacks), which is great since this workday may well blend into the next one.

When I said "exciting" part of the evening - that didn't include having the entire Orange/Cellcom network grind to a screeching halt. Just before the polls were scheduled to close at 6, we noticed that our up-to-that-moment reliable phones seemed to be acting up in a way that no amount of restarting and app refreshing could fix. Although texts from ECC observers were making it into the system, outbound messages confirming receipt of their reports were backed up and not sending. Once again, the crucial need for redundant systems is proven - as the other mobile provider, MTN/Lonestar - was still working, offering us the ability to provide alternative numbers if needed. Fortunately, Orange gets back up and running, and our relief is palpable. Now, back to business as usual.

The second shift of ECC data clerks are in place and they’re busy following up on critical incident reports and any lingering missing observer reports from earlier in the day. The ECC team is taking the opportunity to complete a blitz on social media (follow them on Facebook!)- basically posting pictures from the day (both from inside the data hub and received from observers at the polling stations), as well as infographics with some of the initial findings, and promoting the video from the mid-day press conference they held. It’s great to see people engaging with the content, and being able to see their efforts reaching a wider audience.

Today’s caffeine intake so far: 3 espresso-based drinks, and 1 Coke. That’s at least three more caffeinated drinks than I’m used to, so either I’m going to crash soon, or be awake for the next 24 hours straight. Actually the latter is more likely to be the case depending on how quickly the observer reports come in after the polls close at 6pm. It feels calm now, but I know we’re soon about to enter the most data intensive part of the evening - albeit an exciting one.

https://eccliberiacom.org/">mid-day statement, with an update about the set up and opening times. It’s been a hectic morning collecting data, but it’s always satisfying when data for each district is complete, the group erupts in cheers and claps in celebration of a new green colored pie. Generally the noise level here is at a constant elevated hum, even more amplified due to the data center being in a fairly small (and tiled) room. When just a few people are on the phone it can sound incredibly loud - making the few silent moments even more distinct (and immediately prompting calls of “It’s too quiet in here…keep calling!"

The technology is behaving well, and has proven reliable so far. The ECC data clerks are using Chromebooks to connect to the database, and they’ve been solid performers. This is a vast improvement over the experience in Cote d’Ivoire where data clerks primarily used their own laptops, which came with all sorts of irregular settings, default programs, the occasional malware (and wacky French keyboards). Also over the past week, the team has spent a considerable amount of time topping up credit and troubleshooting problems on Samsung and Huawei smartphones. While I feel that as a technically-minded individual, I should be pro-Android, the simple fact is: I hate it. It works, but I find it ugly and non-intuitive and clearly I’ve had too much of the Apple Kool-Aid (cherry flavor). Why is it so hard to find the apps? Why do I have to swipe halfway up the screen (but not too far down)? High marks for the universal style plug though - being able to use the same plug to charge smart phone, feature phone, and mobile wi-fi device is a lifesaver.

And on we go into the afternoon.

Okay, espresso in hand! Which is good - because it essentially feels like a crisis response center in terms of activity and overall noise level in here. The refrain we keep using with our data clerks is "Always Be Calling!" - interspersed with "It's too quiet in here!" and "Keep calling, keep calling!". We're still chasing reports from observers who have not yet reported on their arrival at the polling place to begin with. Now we're on to the second reports - whether the polling place opened on time, and the phones are beginning a new round of vigorous chirping. The networks are mostly reliable, with the exception of some more rural parts of Liberia in which the connection is poor. If data clerks manage to reach an observer on the phone, we simply take their observation information manually rather than wait for them to try to send their text through (possibly in vain). As in previous elections, we're using Telerivet to process the messages coming into and going from the Apollo database, and today feels a like lot playing Whack-a-Mole in terms of making sure the phones are a) online b) in network range and c) have enough credit on them. It feels like I'm working in a day care, with each little phone having its own care and feeding needs - often at the same time. That's okay though - we're fortunate to be pretty well-staffed here, so I have the luxury right now of being able to preside over the phones to attend to their every need and keep them functioning.

The first texts indicating that observers are arriving at their polling stations are beginning to stream in, and the phones behind me are ringing away with new message alerts. It provides for an amusing backdrop as the melody includes some chirps, some whistles (which we all find ourselves mimicking), and some generic sounding alert tones. Our data clerks have all shown up, which is a good sign; the coffee has not, which is a bad sign. I brought my Nescafe Gold as a back-up option, but am still holding out hope that actual espresso-based drinks will be on their way soon.

Our biggest concern today (so far) is how the mobile phone networks will perform. During the first simulation, we had a huge backlog of messages on a couple of numbers (used by observers in the most populous county, Montserrado), made worse by observers continuing to retry sending their messages multiple times when they didn't get an immediate reply that the message had been received. We added a couple of new sim cards into the mix, so hopefully this will help reduce the potential for overload on a particular number.